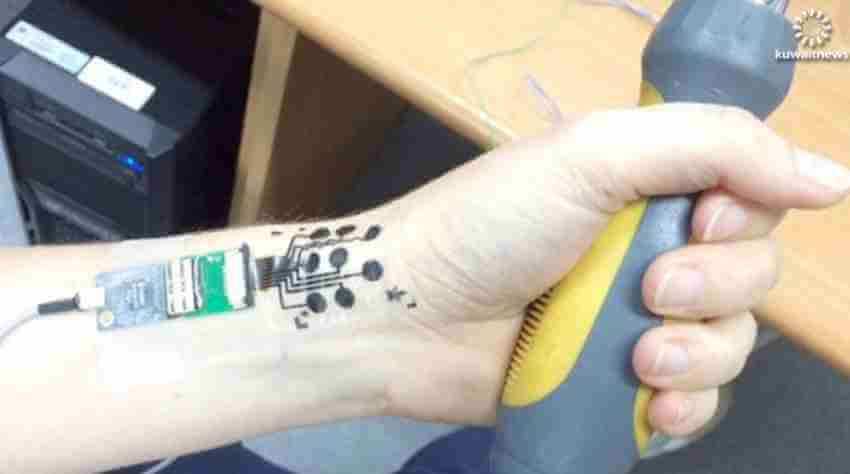 Researchers have developed an ultra-thin, flexible electrode which can be applied as a tattoo on the skin and then after monitor the electrical signals in the human body.

The technology was developed to make long-term, stable recordings of muscle activity without bothering the person.

The thin electronic tattoos have diversified applications in the medical field, comprising to map emotions based on facial expressions, study neurodegenerative diseases and control prostheses, the researchers said in a statement.

Yael Hanein, an associate professor of electrical engineering at Tel Aviv University in Israel said that, the researchers are exploring the potential ways in which the tattoos can be used for psychological assessments and as a diagnostic tool for Parkinson’s disease (a neurological disorder that can cause tremors, muscle stiffness and coordination in human body).

The “tattoo” is comprised of a carbon electrode, an adhesive surface that fastens the tattoo to the skin and a polymer coating that can conduct electricity.
Hanein says, “The major benefits include long-term stability and comfort, and in addition, simple and quick application on the skin,” However, she added, “there is still more work to be done on the data capturing and analysis.”

The innovation signifies an exciting development, said Lisa Feldman Barrett, a psychologist who studies emotion at Northeastern University. Barrett said, there exist some things an electrode simply won’t be able to measure. She added, “There are no technological advances of this sort that will ever let you read emotions in someone’s face. Emotions just don’t work like that.”

In Barrett’s opinion, cross-cultural studies reveal that emotions are not generally linked to specific facial expressions, and circumstance is vital when we predict the emotional state of those around us. She added, “Emotions aren’t detected — they’re perceived.”

Amazon: One Word Definition for eCommerce