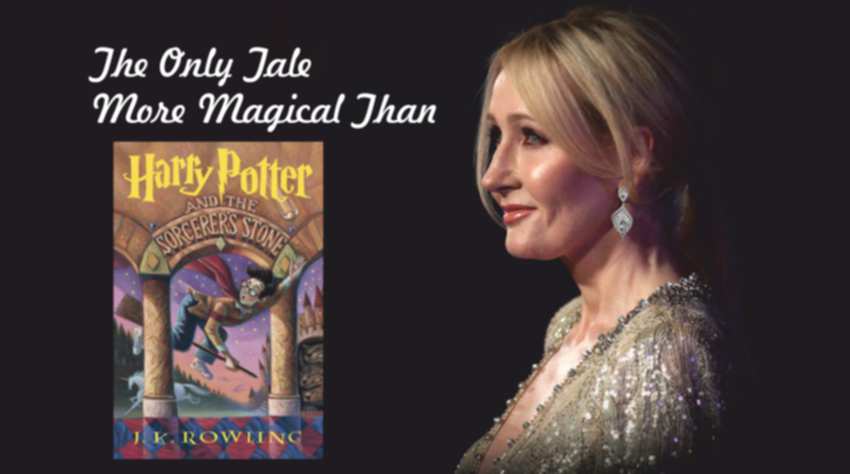 Nearly everyone has heard about the famous Harry Potter books series; however, almost nobody has heard the incredible journey of the author, J.K. Rowling from zero to hero. I personally haven’t completed any of her books and almost fell asleep amidst the film, however, found the story behind the story more convincing and captivating.

It’s not just because the world loves a good rags-to-riches story, and hers is truly outstanding. But because she depicted herself as “the greatest disappointment [she] knew” before she sat down to write one of the most loved fantasy worlds on paper. It’s because she turned the agony over her mother’s demise into a story where a mother’s adoration for her child saves the world. It’s because failing made Rowling stronger against despair and poverty to find her the very best calling.

Her Journey to be a Magician

Much like the Harry of her fantasy series of books, Rowling took a precarious pathway to success. And within five years, she ended up becoming one of the wealthiest women in Great Britain. Her self-made fortune accumulating to nine figures combined with her influence as an author has made her one the most effective women of all time. More than her fortune, Rowling’s influence rises beyond her generous stature as she impacts the moral and social measurements of her massive fan following.

Rowling’s humble beginnings can be followed back to seven years after graduating from college. This was the time when she saw herself as the biggest disappointment. She had a failed marriage, no permanent work, and a young little girl to take care of.

After her separation from husband, she moved from Portugal to Edinburgh, Scotland close to her sister. The broken marriage with Portugal TV writer, Jorge Arantes caused her so much wretchedness that she suffered mental depression and she went as far as to commit suicide.

Striving to survive in Scotland, she tried her luck in teaching English as a foreign language. However, to get the post, she required further postgraduate accreditation, which needed her to study full-time for one year. She registered herself into this course upon completing her first novel while relying on benefits through the state welfare support.

Her Journey and The Subsequent Success

The unfortunate situation was a similar source of motivation that drove Rowling into becoming an immense success. A short story on how Rowling completed the first novel was also well-known among her fans.

She wrote the work in various cafes, particularly in Nicolson’s Cafe, which turned into a local place of interest. Only when Jessica, her daughter fell asleep, Rowling could start writing the novel. She needed to tire Jessica by walking to various cafes and only then she could continue writing, which ended up being exceptionally intense for a single parent.

The first novel, named Harry Potter and the Philosopher’s Stone, was initially a manuscript composed on an old manual typewriter that brought to fruition in 1995.

Bryony Evens, who reviewed the book’s initial three chapters, reacted excitedly so that the personnel from the Christopher Little Literary Agents chose to represent Rowling in hunting down publishers. But they had to wait as twelve publishing houses rejected the manuscript at first.

Luckily, a small publishing house proprietor, Barry Cunningham agreed to publish the book owing through her eight-year-old girl who loved reading the opening pages, immediately asking for the subsequent writings.

Afterward, Rowling got several awards, one of these from the Scottish Arts Council. Since then, she turned into a highly sought-after writer, and consequent installments were successfully released with the series adding more and more fame.

The Harry Potter fantasy series won several book grants. It won the Smarties Prize a record three times in succession, yet a generous soul she is, Rowling pulled back the novel from the contest to offer an opportunity to other books to gain acknowledgment.

In 2000, the fourth installment named Harry Potter and the Goblet of Fire, which was released in the US and the UK broke the business record of the two countries. Comparatively, the Prisoner of Azkaban sold somewhere in the range of 300,000 copies in a year, while the fourth book sold 300,000 copies in just a day.

Her books were later adapted to film in the equally renowned Harry Potter film series. The enormous fortune she earned was subsequently shared with charitable institutions. She then built up the Volant Charitable Trust in 2000 which helps in reducing social equality and poverty.

Lessons from Her Story

Surely, this zero to hero journey of J.K. Rowling is one of its kind which urges and pushes us to never abandon our greatest dreams.

Doing what you truly love is amongst the most important steps towards understanding your objectives. Regardless of whether it be in writing or any other fields, keeping the enthusiasm alive gives enough fuel to proceed with the drive.

Love and live your dreams for the life you never want to regret!

The 50 Most Empowering Women In Business July2017

The Körber Group invests in BigRep