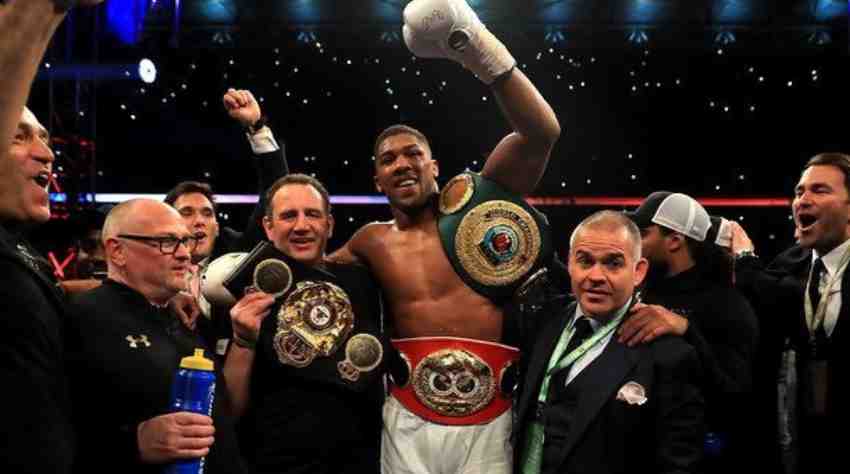 Anthony Joshua went home with the heavy sum of 15m Euro on his win against the Ukrainian, Wladimir Klitschko. Anthony Oluwafemi Olaseni Joshua, MBE is a British professional boxer. He is currently a unified world heavyweight champion, having held the IBF title since 2016, and the WBA and IBO titles since April 2017.
Anthony has become the talk of the day in boxing headlines because he recently won a great fight against the Ukrainian, Wladimir Klitschko in front of the 90,000 crowd at Wembley Stadium in England which led to his being honored with the WBA title.
We could all remember the moment when Joshua was in Nigeria in the period of 2007 where he intended to take part in trials ahead of the 2008 Beijing Olympics qualifiers, but he was deprived of this beautiful opportunity, with heart full of disappointment, Joshua went back to England to represent Great Britain where he was wholeheartedly accepted, welcomed and was encouraged with lots of Enthusiasm, today Anthony Joshua is no longer looking for where to box or be recognized rather he became a strong point of reference, mentor to many people and will continue to excel in this quest.

Had it been he was taken in by the Nigerian Boxing officials at the very stage of infancy in boxing, maybe he could have ended up winning the Nigerian medal and missed the very opportunity of gaining such international stance as with the Great Britain today.

Nigeria coach at the time, Adegboyega Adeniji-Adele also confirmed the fact that Joshua was at the Nigerian camp during the period of selection with all necessary qualification as carved out by this organisation but could not be taken in, it would simply remain that the very officials who did not accord him the slight chance of participation will today stand to explain to the people of Nigeria the very cause of his rejection at the time.

The newest champion has joined the legends in a great deal of boxing to have attained this height of glory, as he recently made known to his fans stating that “I am hungry” and right there on his dining set would clearly reveal to you that hunger is now a thing of the past in his life, money and the need for luxurious life will ever stick to his fingertips till the time he chooses to make it a past life. One may be wondering what has kept Anthony Joshua going after his unexpected reject in the time of infancy in his newly founded career. And the very answers would always fall in this category;

1. Confidence: As young as this great hero could be, with his fresh blood and strength, he sees himself with full of all the necessary ingredients to make a fine meal and in turn satisfy his every appetite, and believe me he has done that.
2. Hard work and Consistency: The need for growth and advancement to meet the most challenging part of Joshua’s life was made known to him from the very point of first rejection but he found that very reason to buckle up, he had no option than to look elsewhere but in search of this next opportunity he kept the good work of working on his rudiments of operation, he continued with practice and kept it going till the day he started reaping the fruit of his labor.
3. Action-oriented: Time comes when a man gets the clear view of where is going and what his targets might be, then he needs to do something about it, Joshua is a great boxer, yes! But he worked for it, he had plans of action, followed instructions and never procrastinated. Whenever he needed to put comfort away, he did it with no second thought or compromise, what could have been the result of such sacrifice if not what he got today as a victory of ages.

The life you may want today, may not have presented itself in a golden wrap but if you give a chance to hard work and a big distance from instant gratification as this great man did with utmost negligence to his infant comfort zone, you will end up reaching to the level of less work and commitment but continuous and undisrupted flow of income, at this point what you wished for in those years would turn a scrap compared to what you would have.

Some Interesting Logistic Trends to Watch