Mobile app installs used to be the name of the game for app marketers. After all, people have to first install your app before they can engage in subsequent revenue-earning actions like subscribing or making an in-app purchase. But the approach to monetizing apps is changing. As Forbes reports, recent research from Gartner showed that fewer than .01 percent of mobile apps will “be considered a financial success by their creators” at the end of 2018.

This is due in part to the fact that it’s more difficult to drive post-install events than it is to drive installs. Focusing primarily on app install acquisition may drive more installations for your app, but many of these users will either delete the app shortly thereafter or let it sit dormant on the home screen of their mobile device. Marketing Land reports that 21 percent of people will use an app just once; and 71 percent will churn within three months. This means marketers essentially end up paying for users who never convert. It’s easy to see how this makes monetizing your app difficult, especially given that many apps are free to download, thus depending heavily on post-install events to generate revenue.

The Importance of Mobile App Retention

Driving a constant influx of new mobile app users can become expensive over time—and unproductive if they fail to engage with your app further. However, retaining users you’ve already acquired through strategic reengagement tends to be more cost-effective while yielding better results. One way to do so is by retargeting users by reminding them what they’re missing using push notifications and personalized ads.

In a “freemium” landscape, app monetization depends on users engaging in post-install events: creating a profile, making a purchase, subscribing, unlocking a new level, etc. It’s noteworthy, then that, according to one study of 500 retargeting campaigns and 9,000 new user acquisition campaigns, “Users from retargeting campaigns had a noticeably higher engagement (or number of events per user) than new user acquisition campaigns.”

So, if retargeted users engage in more revenue-producing events and cost less to acquire than brand new users, your ad spend goes a longer way. Furthermore, you’ll see the lifetime value (LTV) of your user base increase, as these reengaged users are more likely to stick around and become loyal users over time. 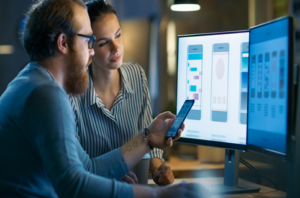 Reaping the benefits of re-engaging your mobile user base hinges on convincing people to revisit your app and engage in desired actions. There are a few ways to do so:

Retargeting services aim to re-engage users who previously downloaded your app before dropping off somewhere in the funnel by serving them personalized ads. For example, let’s say Amy installed your dating app, created a profile, used it for a day, then went dormant. Launching a dynamic re-engagement campaign would entail serving an ad saying something along the lines of, “Meet new singles in [your city] today.” This has a good chance at piquing her interest by reminding Amy there are new profiles to peruse within your dating app. A call-to-action button like “Open App” or “Start Swiping” creates the shortest possible route back into your app.

Push notifications are another way to re-engage users to boost retention rates. Pro tip: Since users can opt out of push notifications, it’s savvier to wait until they’ve engaged in at least one post-install event before asking permission to send these messages. This gives your app a chance to demonstrate its value before asking people to allow messages. Send sporadic, valuable notifications reminding users what they stand to gain by re-engaging, like discounts, new content and more.