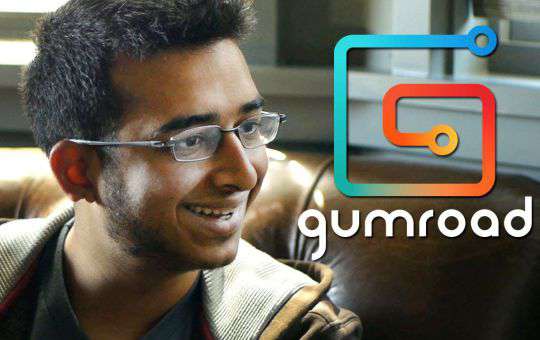 Sahil Lavingia is the Founder & CEO of Gumroad. The son of Singapore-based investment bankers of Indian origin, Lavingia is no different than that of the stereotypical Silicon Valley entrepreneur.

Lavingia made a modest attempt at going to college, at Silicon Valley, enrolling at the University of Southern California to study computer science, but within a semester, he quit to join Pinterest as its main designer.

He was Pinterest’s founding designer, before he launched Gumroad in 2011. Sahil Lavingia says, “We’re excited about providing creators a way to own & build their own audiences and sell directly to those audiences, whereas eBay & Etsy are more about browsing & discovery,” he adds, “We should not be between the product & the consumer. It’s really more about empowering creators to take control of the relationships that they have with their audience.”

If you think it sounds like, Etsy, eBay, or Amazon, your confusion isn’t improper. Like these industry giants, San Francisco’s Gumroad focus to help independent business owners, or “creators,” sell their wares online. There’s only one difference, that is, Gumroad lets you take all the credit.

Gumroad allows its users to sell directly to customers with services such as payment’s processing, file hosting & sharing, and online streaming, not like third-party providers, which take users away from a seller’s site when they want to make a purchase. And even if you want to sell something from within your own social-media messages, that can be arranged for you too.

When they were on trial the service last September Gumroad was one of the Twitter’s first Buy button partners. Gumroad is also on a short list of sites to which users can link from within a YouTube video. On each transaction Gumroad takes 5 percent- and 25 cents.

Mike Abbott, a general partner at Kleiner Perkins Caufield & Byers, a Gumroad investor says, “That world of going to a destination to peruse things is becoming much more decentralized.” He further added, “If you’re a writer, and you go directly to your audience with your work, you’re ‘disintermediating’ some of these choke holds.”

But it is a difficult task. Amazon, iTunes, and the like are still ruling e-commerce, but in addition, the world of online business transactions has grown extremely since eBay’s PayPal was virtually the only game in town. Square, Jack Dorsey’s payments company, began offering online business transaction services to customers in 2013. Also, last July, Twitter picks up the payment startup CardSpring for a concealed sum. Not just that, in May, Intuit picked up Check, a Palo Alto, California-based mobile bill-paying service for $360 million. There are so many independent upstarts too, like Dwolla to Stripe to Shopify Payments.

In December, Gumroad signed a deal with Hachette to offer its authors use of Gumroad’s Twitter integration. The publisher attracted attention of everyone, last year in a combat with Amazon over the bookseller’s throttling of Hachette’s titles after contract negotiations between the two broke down. That’s helped Gumroad hooked big-name clients like, the bestseller, The Art of Asking writer, Amanda Palmer. Gumroad also recently began offering rentals, helping lasso filmmakers like Desiree Akhavan, the Girls actress, who is the director and also the actress of indie film Appropriate Behavior.
Lavingia says, it’s just the beginning, adding up,”Today every musician, filmmaker, artist, & author–to varying degrees, all have a means to communicate to the people who care about them & their work. We think that social commerce is the next step.”