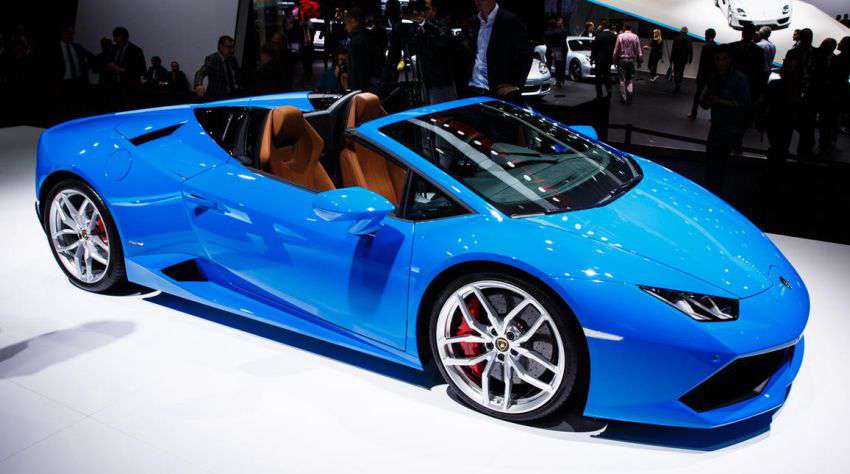 Sports car giant Lamborghini rolled out the new Huracan LP 610-4 Spyder on Thursday. It combines performance of the Huracan Coupe paired with the emotional facet of open air driving. It is priced at Rs 3.89 crore, ex-showroom New Delhi.

The Italian car major also inaugurated its showroom in the city.

Rolling out its latest offering, Lamborghini Southeast Asia Head Sebastien Henry said, “India is one of the key strategic markets for Lamborghini. Given the projected economic growth here, we are optimistic about our scope here.”

The Huracan LP 610-4 made its world debut at the Geneva Motor Show in 2014, and the 2015 Huracan Spyder versions are the successors to the iconic Gallardo.

The Coupe and Roadster versions of the Aventador LP 700-4 and Aventador LP 750-4 Superveloce represent a new benchmark in the V12 luxury super sports cars.

Lamborghini India Head Sharad Agarwal said, “Huracan Spyder is targetted at those discerning few who enjoy performance driving, comfort and technology, (and) demonstrates the latest evolution of
Founded in 1963 by Ferruccio Lamborghini, Automobili Lamborghini is headquartered in Sant’Agata Bolognese in northern Italy. In September, 1998, it was acquired by the German luxury car major Audi, which is part of the Volkswagen Group.”

Lamborghini has created many dream cars such as the 350 GT, Miura, Espada, Countach, Diablo, Murcielago, as well a number of limited editions such as the Reventon, Sesto Elemento, Aventador J and the Centenario. The Veneno Coupe, Egoista and Veneno Roadster were rolled out to celebrate the company’s 50th anniversary in 2013.