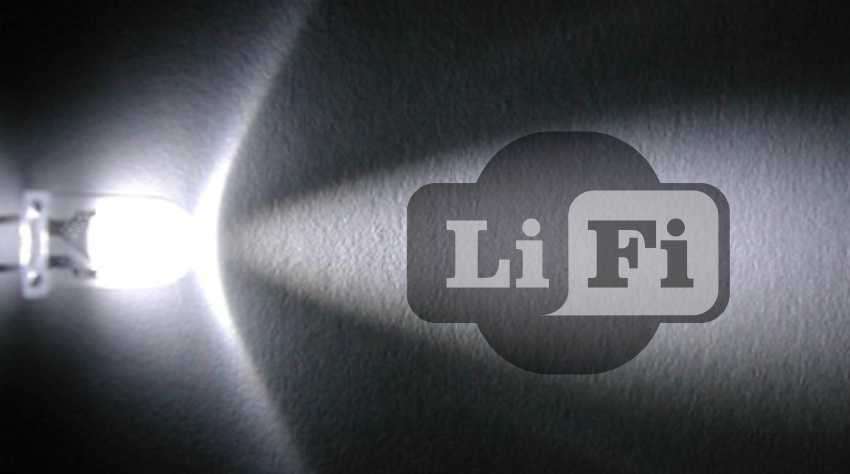 Light Fidelity or Li-Fi is a groundbreaking, high speed or bidirectional fully networked wireless light based communication technology, which standardized correspondence similar to Wi-Fi. Li-Fi is expected to be the ten times cheaper and hundred times faster than Wi-Fi. Using the visible light spectrum, Li-Fi technology can transmit data and unlock capacity which is 10,000 times greater than that available within the radio spectrum.

Li-Fi is invented by Professor Harald Haas from the University of Edinburgh in UK, Professor Harald Haas demonstrate Li-Fi, is a subset form of optical wireless communications (OWC), allows data to be sent at high speeds using visible light communication (VLC) or infra-red and near ultraviolet (instead of radio frequency waves) spectrum, which carries much more information and has been proposed as a solution to the RF-bandwidth limitations. It could be a complement to RF communication (Wi-Fi or Cellular network) even a replacement in context of data broadcasting, which makes use of light waves instead of radio technology to deliver data.

According to scientists who have taken Li-Fi out of the lab for the first time, trialling it in offices and industrial environments in Tallinn, Estonia, reported that they can achieve data transmission at 1GB per second – that’s 100 times faster than current average Wi-Fi speeds, reaching speed of Li-Fi is carrying out 224 gigabits per second in lab conditions. The potential for this technology to change everything about the way we use the Internet is huge. Li-Fi allows for greater security on local networks as light cannot pass through walls, which also means there is less interference between devices. Light is already used for data transmission in fibre-optic cables and for point to point links, Using light to deliver wireless internet will also allow connectivity in environments that do not currently readily support Wi-Fi, such as aircraft cabins, hospitals and hazardous environments.

Li-Fi is a special and novel combination of technologies that allow it to be universally adopted for mobile ultra high speed internet communications. Li-Fi technology is being developed into a ubiquitous systems technology, consisting of application specific combinations of light transmitters, light receivers including solar cells, efficient computational algorithms and networking capabilities that can be deployed in a wide range of communication scenarios and in a variety of device platforms.

“Li-Fi is creating a new industry,” says Haas. “It’s something we believe is big, and the reason for that is we see a variety of different applications.”

Li-Fi applications are diverse as a result of its key features, such as directional lighting, energy efficiency, intrinsic security, high data rate capability, signal blocking by walls and integrated networking capability.
Airlines are interested in the this technology to deliver entertainment to rear seat infotainment devices or directly to passengers iPads and tablets.

Hospitals can be the major players who can adopt this technology to connect the medical equipments as light has no electromagnetic interference.
Li-Fi can also help with underwater networking, with divers and submersibles able to gain connectivity via LED.

Li-Fi signals are less prone to leakage beyond their intended environment, so offering increased security. The light does not pass through the walls. Therefore, with minimal precautions to avoid leakage from windows, etc, security is fundamentally enhanced as compared with Wi-Fi.

In case of data affectability, like hospitals are a specific case of surroundings where both EMI sensitivity and security of data are arising issues. Li-Fi can authorize the better arrangement of protected networked medical equipments, patient records, etc.

“What we’re envisaging now is illumination, but it (light) will be a service in the future,” says Haas.
Incandescent bulbs have a lifespan of around 2,000 hours, while LED have as much as 50,000 hours. “People who manufacture them (LED bulbs) are aware that their lifecycles are much larger, so they need to find new ways of adding service to the light they sell. That is one of these additional services that would enable Phillips and others to distinguish themselves from the competitors,” he continues.

For now, Li-Fi will remain a thing of the future for most people.