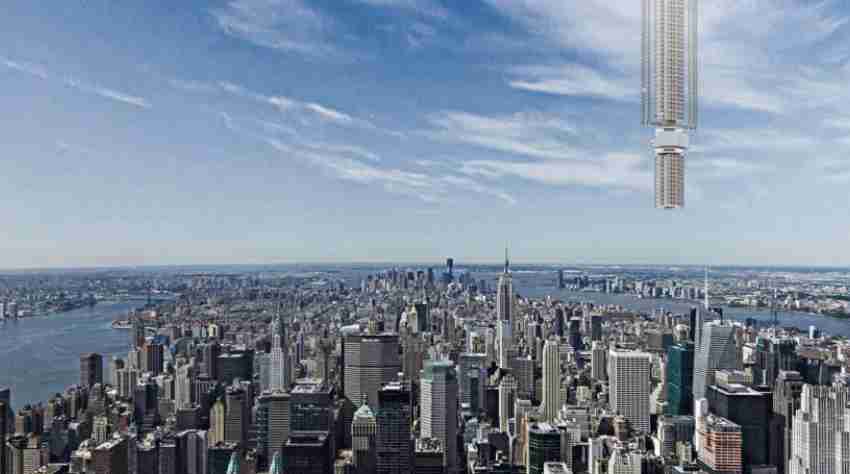 Modifiable asteroids are no longer consigned to science fiction. In 2015 the European Space Agency proved that it’s possible to rendezvous and land on a spinning comet, by conducting its very famous Rosetta mission. NASA has also planned an asteroid retrieval mission for 2021 which goals to prove the likelihood of capturing and relocating an asteroid.

A New York-based architecture company, Clouds AO, has revealed plan for a skyscraper that will be suspended downwards from an asteroid orbiting the Earth. Named as ‘Analemma Tower’, the skyscraper will be hanging from high-strength cables attached to an asteroid. The building would travel in a 24-hour cycle and will return to the exact same position in the sky each day.

Analemma can be positioned in a geosynchronous orbit which would allow it to travel between both the hemispheres on a daily loop. The ground trace for this pendulum tower would be a figure eight, where the tower would move at its slowest speed at the top and bottom of the figure eight allowing the possibility for the tower’s occupants to interface with the planet’s surface at these points. The anticipated orbit is calibrated so the gentlest part of the trajectory of tower occurs over New York City.

Analemma would get its power from space-based solar panels. These panels would have constant exposure to sunlight, with a better efficiency than conventional PV systems since these are installed above the dense and diffuse atmosphere. Water would be filtered and recycled in a semi-closed hoop, refilled with condensate captured from clouds and rainwater. Advances in cable-less electromagnetic elevators have effectually shattered height restrictions imposed by elevator cable spool volume.

Analemma Tower is a proposal designed to be the world’s tallest building ever. Harnessing the power of planetary design thinking, it fuels the craving for extreme height, constant mobility, and seclusion. If the current boom in residential towers shows that sales price per square foot rises with floor elevation, then Analemma Tower will command record prices, justifying its high cost of construction.

NATO to give 3 billion euros on Satellite, Cyber Defenses