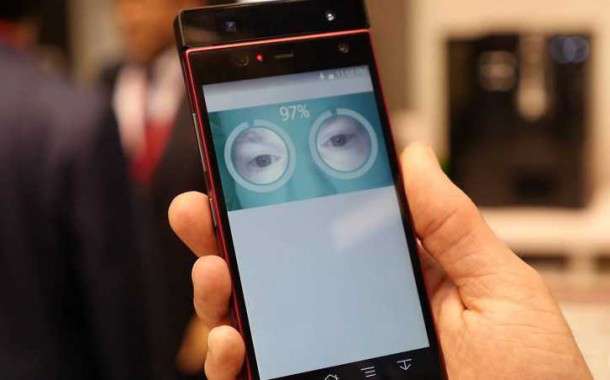 The new Arrows has all the goodies we would expect to find of a modern banner bearer. It has a 5.2-inch 1440×2560 IPS display, showing off Android 5.0 Lollipop in a utilitarian, but handsome form factor.

Under the hood, an octa-core Qualcomm Snapdragon 810 CPU and Adreno 430 GPU run the show fueled by a 3,120mAh battery. 3GB of RAM is on tap to keep things organized, along with 32GB of expandable storage. A Sony-supplied sensor is the foundation of the 21-megapixel main camera, providing all the features we have come to expect.

So far, it reads like a lot of devices already available in most developed markets. What makes the Arrows NX special? It is equipped with an iris scanner. The feature is called Iris Passport, and once you have everything mapped, it takes roughly half a second for your phone to unlock, just by looking at it. Moreover, Iris Passport can be used with any applications that require a password, or for payment authentication. The iris scanner can even distinguish differences in the eyes of twins trying to unlock the same device.

The Iris Passport is part of NTT DoCoMo’s initiative to bring standards-based biometric authentication to the forefront. Several models are already on the market with fingerprint authentication, the Fujitsu Arrows NX F-04G is the first with the ability to authenticate through iris detection. It is also an intelligent module, learning more about your eyes’ patterns each time you use it.

The Fujitsu Arrows NX F-04G is available through NTT DoCoMo in Japan for approximately $750 full retail. There are no announced plans to bring the device to the United States (or anywhere for that matter), but we want one.
Very soon, it seems, your eyes could very literally become the keys to your digital identity best you don’t lose them.

Hooks, Let’s Get almost all the notification with Android and Apple Devices.