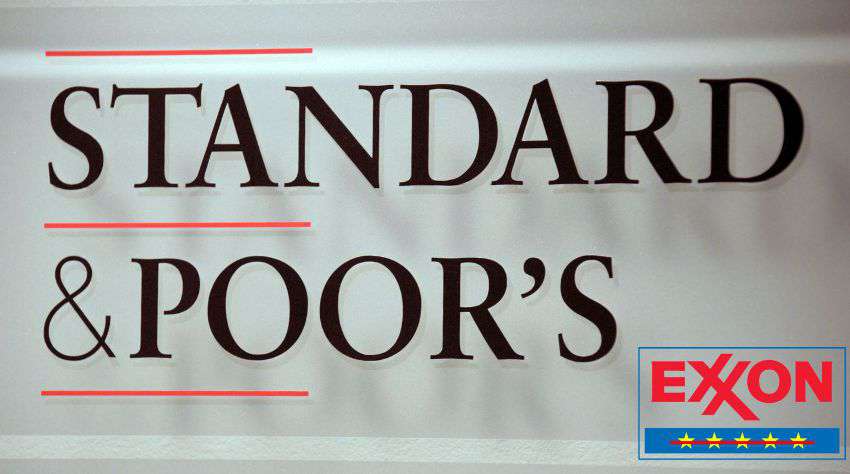 ‘Standard & Poor’s Rating Services’ threatened on Tuesday to strip Exxon (XOM) of its perfect AAA credit rating. The rating companies placed Exxon on a negative credit watch, warning the oil giant’s credit measures will remain ‘weak’ through 2018 due to the dramatic plunge in oil prices.

Exxon is a chain of gas stations and a brand of motor fuel and related products by ExxonMobil. From 1972 to 1999, Exxon was the corporate name of the company, previously known as Humble Oil or Standard Oil of New Jersey. It was one of the Seven Sisters that dominated the global petroleum industry from the mid-1940s to the 1970s.

Only three American companies can brag of a higher credit rating than the United States government: ExxonMobil, Microsoft and Johnson & Johnson.

But according to the S&P, “The world’s largest publicly-traded oil company, Exxon could lose its AAA status within the next 90 days.” That would leave Microsoft (MSFT, Tech30) and Johnson & Johnson (JNJ) as the only remaining U.S. companies with perfect ratings from S&P.

The AAA rating is reserved for companies with an “extremely strong” ability to pay off their debt and allows them to borrow money very cheaply.

In addition to Exxon, S&P also warned it could downgrade the credit ratings of ConocoPhillips (COP) and Anadarko Petroleum (APC). S&P rattled global investors in 2011 by removing the U.S. government’s AAA rating in 2011 amid political instability in Washington. S&P also infamously gave the perfect credit rating to mortgage securities that later imploded during the 2008 financial crisis.

0
insights success February 4, 2016
No Comments Yet