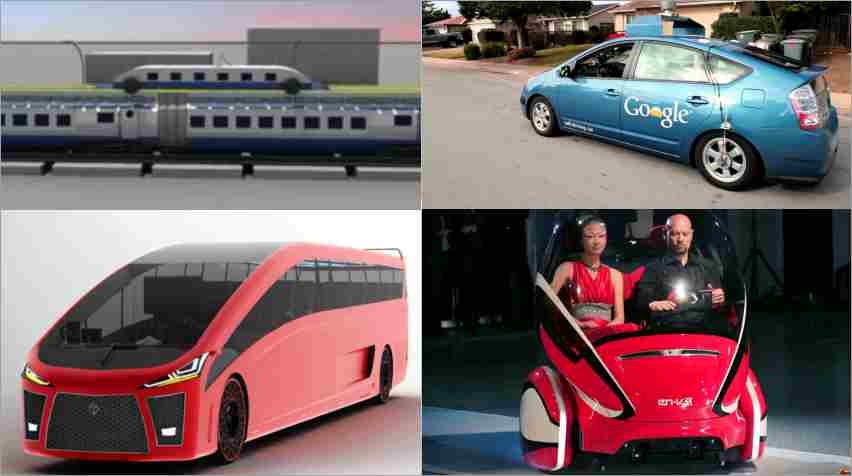 A Cooperative Mobility Ecosystem is a concept designed to connect the power of artificial intelligence, robotics, and big data for transforming mobility experience and quality of life. Vehicles shall communicate with each other and infrastructure to ease traffic congestion and eliminate traffic fatalities, thus, increasing the productivity of road users.

Perhaps the most famous potential future transportation method is Google’s driverless car. Video cameras, radar sensors, and laser range finders are used in the car to drive independently. The trail run for Google’s car has already been initiated with more than 300,000 miles without an accident. The NeuV, or New Electric Urban Vehicle, is a concept vehicle based on the fact that privately-owned vehicles sit idle 96% of the time. It is designed to discover the idea of how to create new value for its owner by functioning as an automated ride sharing vehicle, picking up and dropping off riders at local destinations when the owner is not using the car.

Apple is also working on iCar, an electric vehicle, which is undergoing research and development process. The reports suggest that the iCar would look similar to a minivan and the production of the car will soon begin in 2020. Now conventional car makers will be forced to rethink their business model as customers will have access to shorter product lifecycles and customizable interiors. General Motors has a take on their version of a driverless vehicle too, but it isn’t a car, rather, it’s the EN-V, the electric-networked vehicle. The EN-V is a two-wheeled battery-powered vehicle made for urban transportation. It drives on its own using sensors to detect its surroundings and wireless communications to position itself in the city, which makes it ideal for dense urban environments because of its compact size and zero emissions.

Even if there are personalized self-driving vehicles, there will still be a need for public transportation and mobility, and that’s where the high-speed bus designs step in. The MACH bus is aerodynamically designed to prevent wind friction and is powered by hydrogen fuel. It features a fluid suspension system to keep the ride nice and smooth. Also, on a long train ride, having the train stop at each station along the way slows the trip and wastes a lot of energy. That’s why Asian researchers have developed a new concept of the never-stopping train. The train runs on tracks but has cars on the top of it that when approaching a station detach from the train, allowing passengers to get on or get off. Meanwhile, waiting at each train station is another car that will be picked up by the train, allowing new passengers to get on the train. The locomotive underneath never has to stop.

Using such vehicle-to-vehicle and vehicle-to-infrastructure communications and drawing upon big data and artificial intelligence, in near future, we will have an environment in which road conditions are predicted and managed, and collisions avoided.