Nicolas Jachiet, Chairman and CEO of Egis, has signed an agreement with the Jordanian government for the improvement of drinking water supply in the governorates of the North of Jordan. This project in which Egis will provide technical assistance to the Yarmouk Water Company (YWC) will address problems relating to drinking water shortages in Jordan and connected with the huge influx of Syrian refugees into the country since 2011. 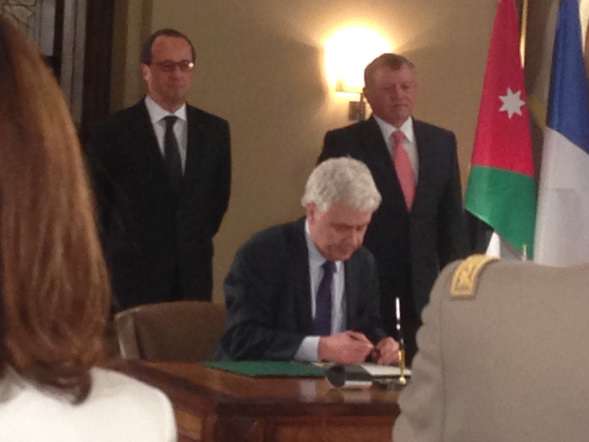 The Yarmouk Water Company manages 80 million m3 of water per year. Between now and 2030, a further 30 million m3 will be necessary to meet drinking water requirements in the governorates of the North of Jordan (Irbid, Mafraq, Jerash and Ajloun).

Since the beginning of the armed conflict in Syria in 2011, the arrival of refugees has compounded the problems facing the supply of drinking water, which was already under considerable strain due to growing demand for water, limited resources and a high ratio of water loss on the main network, otherwise known as non-revenue water (NRW).

This led the Yarmouk Water Company to take the decision to launch a long-term programme to improve water distribution capabilities in each of the governorates in question.

Over a period of 14 months, teams from Egis Eau in association with VINCI Construction Grands Projets will contribute their extensive technical skills to assist the contracting authority in the delivery of this vast project.
This will involve performing work on existing networks (diagnosis, prioritisation, replacement and renovation) but also introducing operational and asset management tools, collecting data (taking measurements on the network) and analysing findings through the use of indicators.

A project with many issues at stake

The project implemented under the auspices of the FASEP, an aid fund backed by the French Ministry of Finance, will run pilot schemes on two zones: a rural zone and an urban zone. In each of these zones, the project breaks down into three phases:

1) Network operation and reduction of non-revenue water
• Improve the network’s operating capacity
• Improve the quality of water supply and the revenue of YWC in some water service areas (by reducing NRW).

Egis is an international group offering engineering, project structuring and operations services. In engineering and consulting, its sectors of activity include transport, urban development, building, industry, water, environment and energy. In roads and airports its offer is enlarged to encompass project structuring, equity investment, turnkey systems delivery, operation and maintenance services and mobility services. Employing 13,000 people, including 8,300 in engineering, the group generated a managed turnover of €937 million in 2015.

Egis is 75%-owned by the French “Caisse des Dépôts” and 25%-owned by Iosis Partenaires (a “partner” executive and employee shareholding).

Innovation That Let You Ride Your Bike Using Your Smartphone