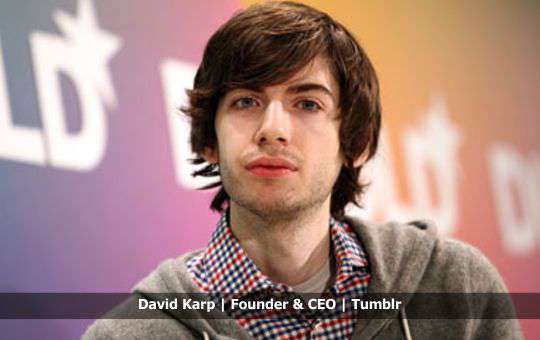 Tumblr has proven to be a very popular blogging site. Actually, a most loved blogging platform till now. But do we know about the man or I should say boy behind it? Well the boy is as cool as the site itself. He is 28 years old, David Karp founder of Tumblr.

Karp founded the site when he was only 20 years old. Well, it is the time when teenager even can not decide which direction to go, he founded a company. Though Karp sold the company to Yahoo, in 2013, but still he is sitting in the chair of the CEO of Tumblr.

Born to Michael Karp, the television composer and Barbara Ackerman, a high school teacher, David Karp were a regular New York city-bred kid, he attended Calhoun school where his mother used to work as a science teacher. He studied there till eighth grade and since then he started to design websites for money. And because of this reason he drops out of school. So he was shifted to home-schooling just to save time. After that he tried to attend university, but some great opportunities did not let him.

It was only at the age of 14 Karp became head of ‘UrbanBaby’, a parenting forum for whom he had developed a software. Just a few months after he flew to Tokio to sharpen his skills more.

In-between a few months after that he founded a totally independent firm, Davidville. And this was the time just after some moths from this venture, Karp formed Tumblr with Marco Arment, an engineer, just because they found out that a tumble logging platform is what a world needs. And their prediction proved right.

Davidville then transformed into Tumblr Inc. and like this David Karp came to name and fame as one of the youngest and most successful entrepreneurs of the world. Though Karp is not much comfortable talking about his name because of the basic reason, peoples reaction when they learn about his age.

But still Tumblr is a beautiful product by a genius boy.

Om Software : Shakes It Up With Real-Time Experiences