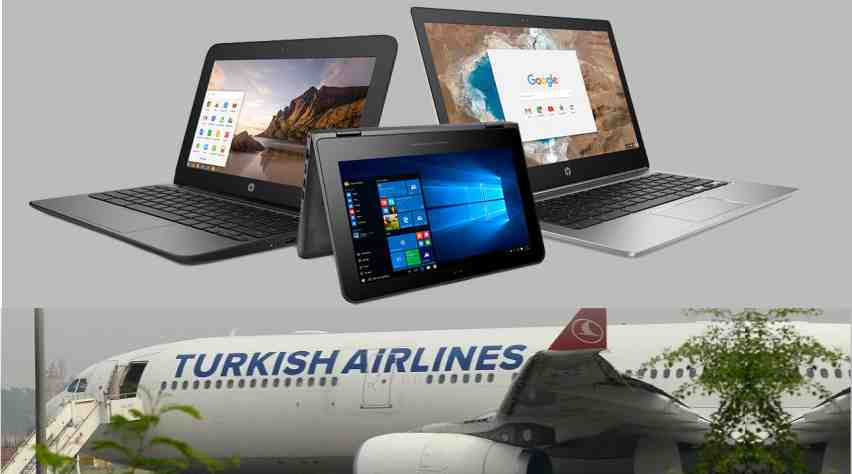 United states has banned large electronic devices inside cabin of flights from several countries. Following the development of people from these countries being deprived of the opportunity of coming into the United States with devices larger in size than the regular mobile phones on direct flights, the Turkish Airline will be offering their customers who fly on ther business class a laptop  and possible means to connect and do their work while on transit.

The Washington will be allowing the devices on this category to be transported as hold luggages. The barring of laptop devices into US through flights is going to be administered when you are traveling from 10 airports in seven Middle Eastern countries and Turkey. Britain followed the suit with a similar ban from five countries in the Middle East, north Africa and also Turkey.  To alleviate the intensity of this inconvenience, the Turkish Airlines has made it known to the public that it will be offering travellers a solution.

“Turkish Airlines being the national flag bearer airline of Turkey, founded at the Turkish Airlines General Management Building which is headquartered on the grounds of Atatürk Airport in Yeşilköy, Bakırköy, Istanbul already went into action of offering laptops for its business class passengers who are to be routing on US-bound flights as from today,” it said in a statement released on Saturday.

Turkish Airline made known to the public that the services of offering laptop systems to the UK-bound business class passengers would be taking place from May 12, and the passengers in this category would be able to ask for a laptop from the cabin crew to use in-flight, it said.

The Security for your files is assured:

The laptops which will be given to these business VIP class travellers has the ability to assure top security and  will be  protecting the users’ privacy  through the possible means of “automatically deleting” all personal data which came into the system from the temporary user once the laptop is shut down, it said. Announcement was made on the month of March, that the ban drew Turkish fury with President Recep Tayyip Erdogan urging Washington and London to withdraw it “as soon as possible.”

Invest in Africa – The Fertile Land

Changes in the Australian Education system after Federal Budget 2017