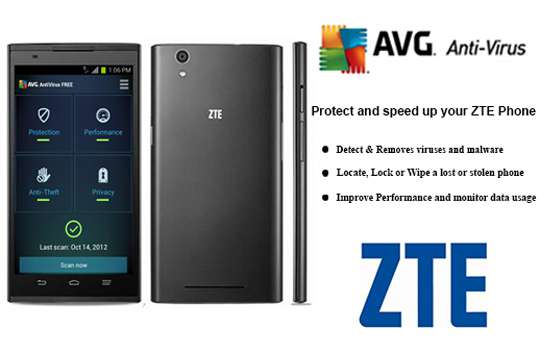 Smartphone manufacturer ZTE and antivirus company AVG have announced a new partnership that will ship AVG’s AntiVirus Pro software on all new ZTE phones going forward. The antivirus app will offer its full feature set for 60 days, after which users can pay for an annual subscription or continue using the free version of the software.
Antivirus on Android phones is a tricky topic, especially since there’s not much overwhelming evidence that anyone actually needs it. Google does a pretty good job of keeping malicious apps out of the Play Store, so your only risk would be from downloading apps from an outside source. I can’t imagine that happens too often for most people.

Do you use any antivirus apps on your smartphone, or have you ever had any issues with malware on any of your Android devices? Let us know in the comments, and if you’re interested in reading ZTE and AVG’s press release, you can find that below.

AVG® TechnologiesN.V. (NYSE: AVG), the online security company™ for more than 200 million monthly active users, announced today a new global partnership with leading telecommunications equipment, networks and mobile devices company, ZTE, to become a provider of mobile security across its range of devices. From May 2015, ZTE smartphones and tablets come pre-installed with AVG’s flagship AVG AntiVirus PRO for Android™ app, giving ZTE customers the peace of mind that they have protection on their mobile devices.

“For many of us, our smartphones have become the primary device that we spend most time with, but ensuring mobile security can sometimes be an afterthought,” said Ms. Wang Xuemei, Business Manager at ZTE. “Our customers will be able to rely on our partnership with AVG to help take the worry out of connecting to their favorite websites, apps and using online services through their ZTE smartphones and tablets. We are committed to mobile security and strive to provide the best mobile experience possible to all of our users.”