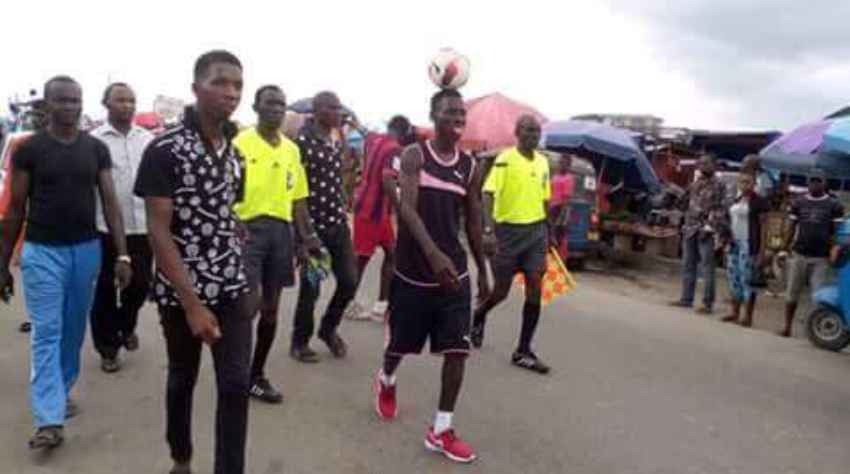 The love of football has always kept Tonye going. When you have the passion for anything, you need to add the determination and hard work to achieve it. You do not expect to wake up and find yourself in the book of great men without adding a calculated effort. The latest football record breaker as tagged by the Guinness note, gave his time, sleepless night; he lived in an unfurnished house with broken glass windows due to the constant late night football practices. The interesting thing about his mode of practices was that; he never expected a dime from anybody, the feeling of satisfaction after each day practice and juggling was enough for him, even though he gets laughed at and shouted at by neighbors for being a disturbance but yet he was never discouraged. Today the note of great men has been opened for Tonye.

The 28-year-old juggler Tonye Solomon officially broke the world record of travelling the greatest distance with a football balanced on his head,” he has achieved his dream of breaking the Guinness book of world record. The 28-year-old Bayelsa was not able to complete his task for the past 6 months due to heavy rain that unfortunately disrupted his mission when he only travelled a few kilometers closer to breaking the record.

Tonye Solomon aka D-BOY tried to achieve his goal of breaking the record on the 9th of July, 2016, but couldn’t due to heavy rain that started after he had covered a distance of 38km. But anybody could expect that he should be disappointed and maybe would leave the whole idea to focus on other things, but otherwise was the case. His failure at earlier stage only gave him more reason to thrive more and practice better. He finally broke the record by walking a distance of 52 kilometers with a ball on his head.
The journey to his goal started from the university town of Amassoma, through Tombia town onto Agudama-Epie before he finished at Peace Park, opposite the Government House, Yenagoa. But this time the weather was bright throughout the walk.
Prior to the failed attempt on July 9, 2016, he was to walk from Ahoada town in River State, down to Yenagoa. The previous route was noted to have bumpy topography which could have caused him some bruises on his leg due to his concentration on the ball on his head. However, the option of Amassoma to Yenagoa was agreed upon.
The current title of “The Greatest Distance With a Football Balanced On The Head,” was bagged by a Nigerian, Chinedu Harrison, who dethroned the former champion, who was an Indian soldier, Naib Singh, after walking a distance of 48.04km.
The Bayelsa State Government is delighted with the achievement. The State Information and Orientation Commissioner, Hon. Jonathan Obuebite signed a statement through which he explained the need for every average Bayelsa youth to engage in things like this to make the state proud and thereby thanked Tonye for his contribution in bringing good colour to the name of the state.
According to Obuebite, he said that Tonye should go for more resounding glories while clearly stating that the government will support him in his quest for more laurels.
In a statement by Tonye Solomon, he said that his next feat will be to climb a mast with a ball on his head and possibly swim with a ball on his head. The need now is to wish him luck in his future endeavors.
The young man has gone a long way by including his states’ name into the Guinness Book of World Records and stands a chance of being a motivation to other football lovers and the youth in general.

The Insights To Lead The Global Digital Market

EnSoftek: Serving Health and Human Services Industry with the Touch of Technological Expertise